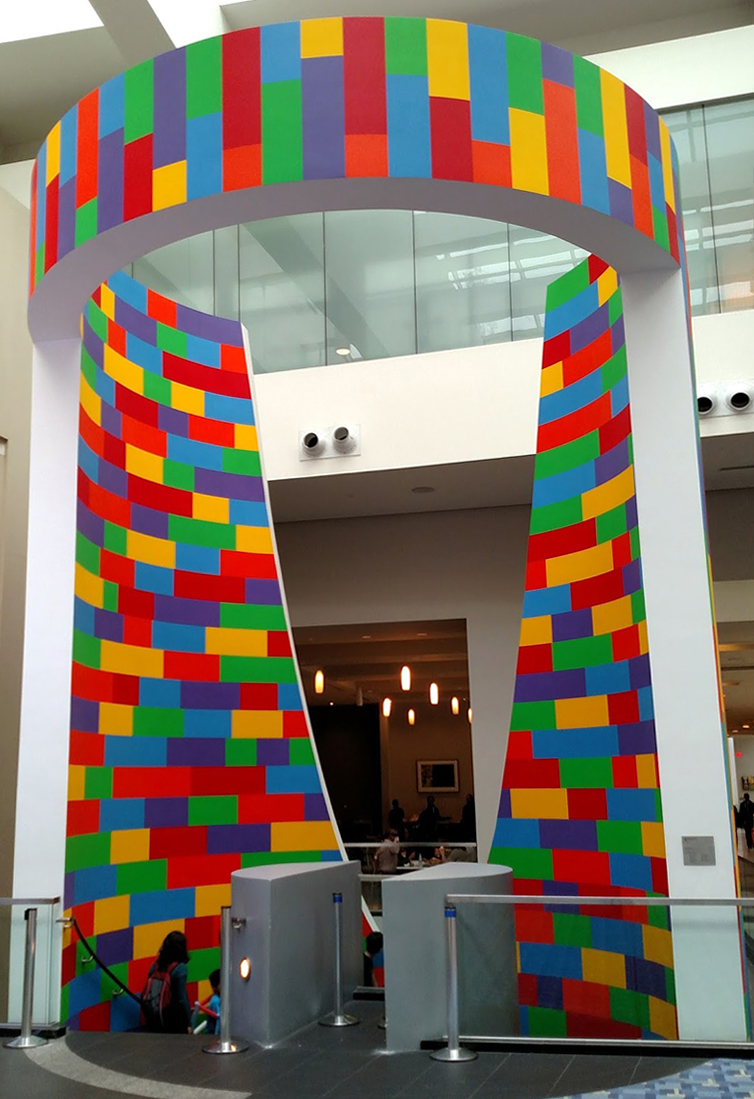 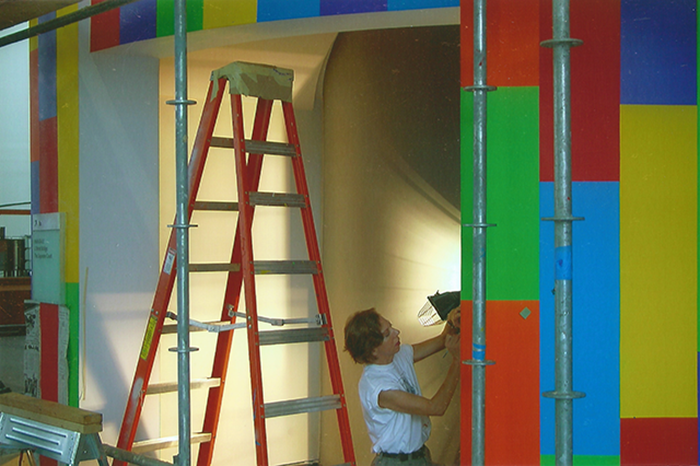 
At the top is the entrance/exit view of LeWitt's conceptual work of art, here presented from the second story of the Washington D.C. Convention Center.
The architectural folly is a 50 foot high, circular stairwell which concludes
on the floor below, at ground level.

I was one of twelve artists who were hired as contractors to produce the final art "painting" of LeWitt's plan of design. We marked with pencil, each oblong's measure---and painted them in parallel alignment---as vertical columns on
the stairwell exterior, and, in horizontal bands on the interior side.

A mere six colors were deployed throughout: purple, blue, green, red, orange, yellow. The project work was completed in approximately 56 days, in 2003. 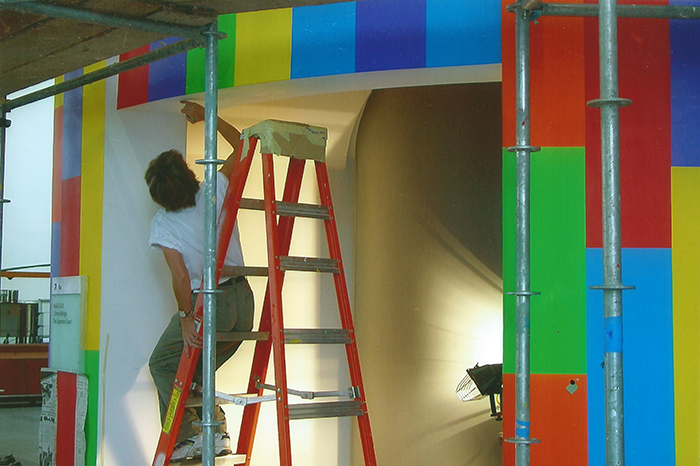 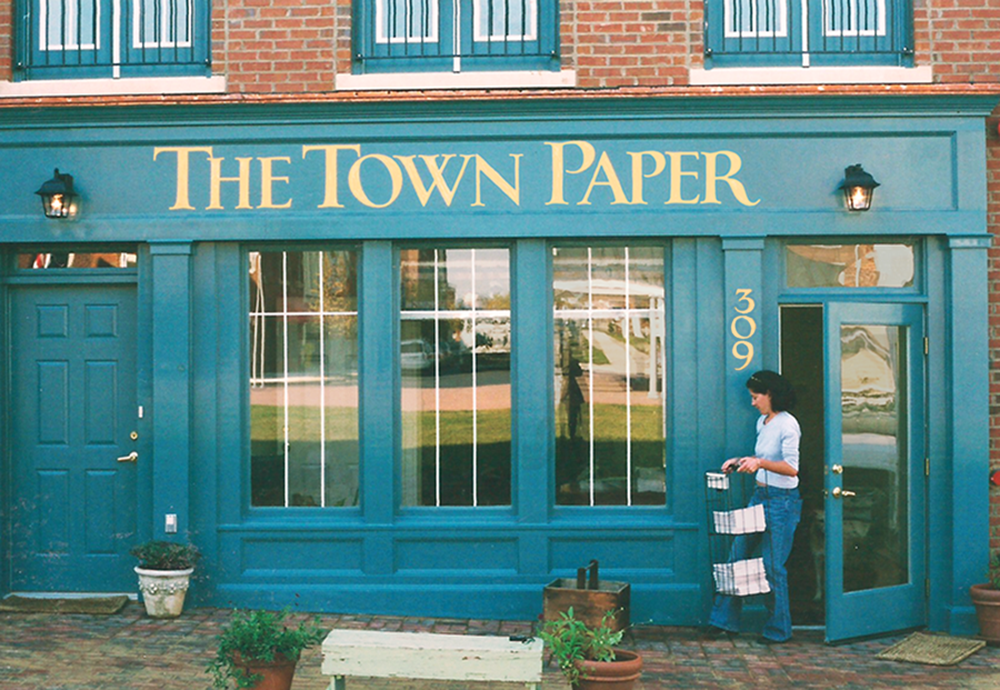 In the Autumn of 2001, I received the commission to create banner signage
for the newspaper offices in the recently established "new urbanist community"
of Kentlands, Maryland.

I wrote the newspaper's Masthead in the classical script of Monumental Roman Capitals. I paintd the final art using a brush and gold enamel; and, the size is, approximately, 15 feet by 20 inches.

Diane Dorney, the publisher, is shown, here, with a stack of Vol. 3, No. 6 of the bi-monthly publication. 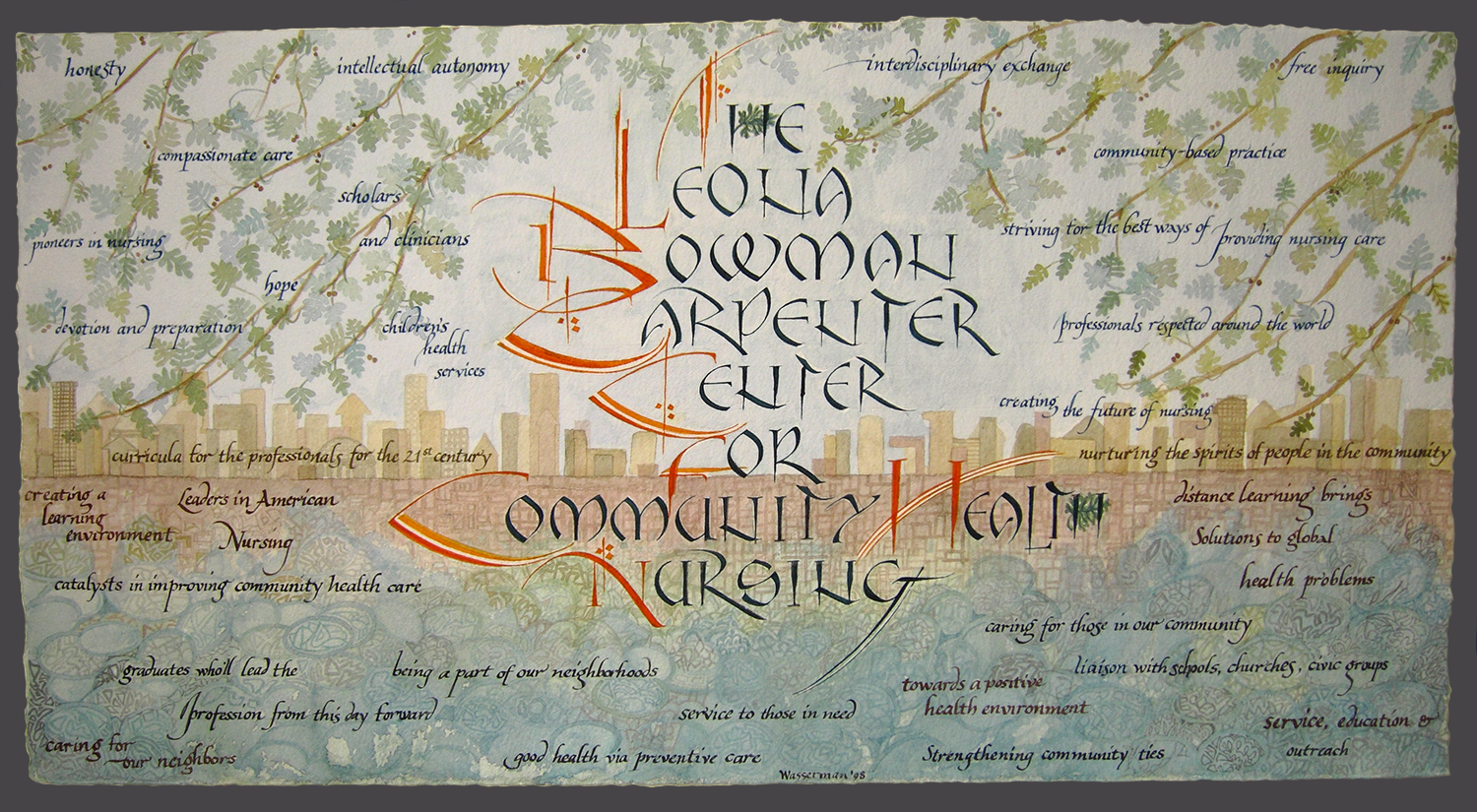 Design B  is an abstract cityscape of Baltimore, Maryland, with medicinal oak branches and leaves overhanging the waters of the Patapsco River in the foreground; and those waters coming to the edge of land aligned with skyscrapers and the built environment, on the horizon.
I had received the commission to create a work of art to honor a Johns Hopkins University nurse alumnus,
Leona Bowman Carpenter, at the time of dedication of the Anne M. Pinkard building, which is the new
home of the Johns Hopkins University School of Nursing.
The watercolor painting is one of two "design comprehensives" that I proposed for the just-completed building site
---and, this composition was chosen to be made in final form as a wall mural. 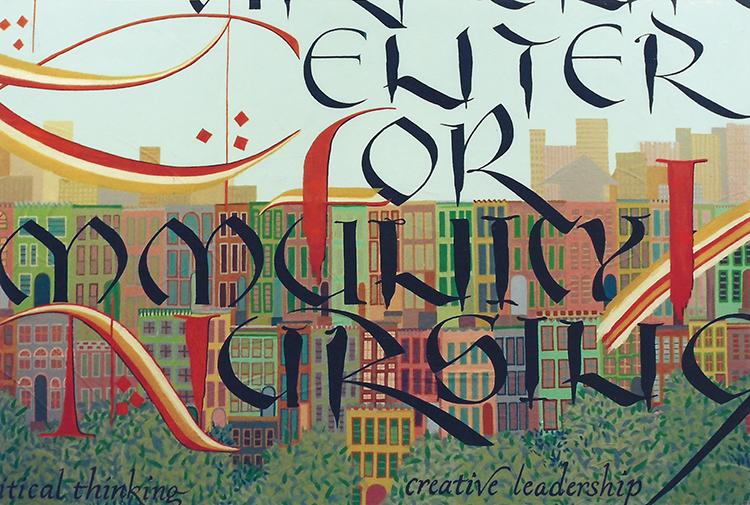 One modification was requested of me to make, which was: to include some pictorial representation of Baltimore's well known and long-standing "row houses".

After making that change to my design comprehensive---of replacing the "red earth" i.e. land, with the colorful, adjoining row house---I replaced the "river waters" with tall, leafy tops of trees, as well. 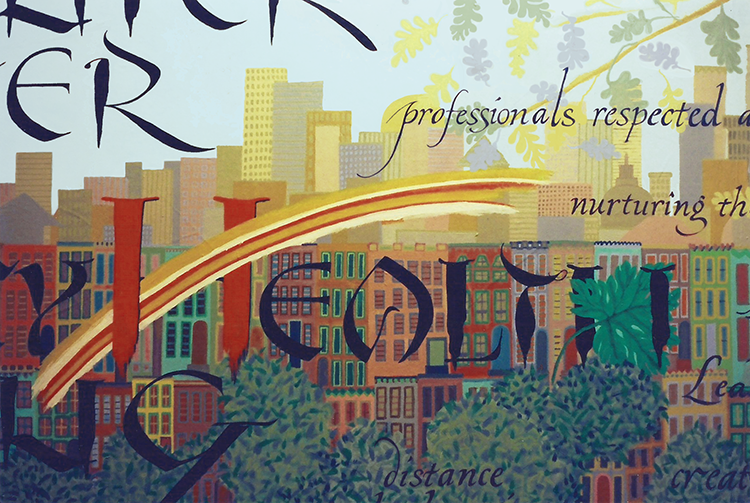 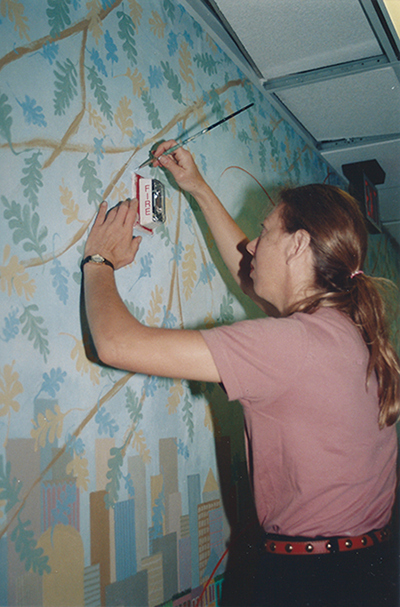 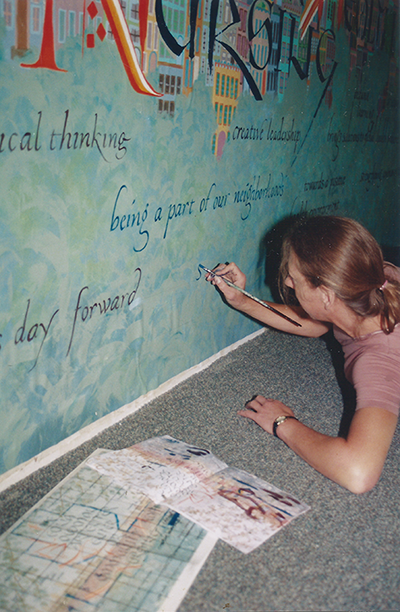 The final art is painted on canvas, mounted to the wall in the fifth floor foyer, leading to the Johns Hopkins University School of Nursing faculty offices. 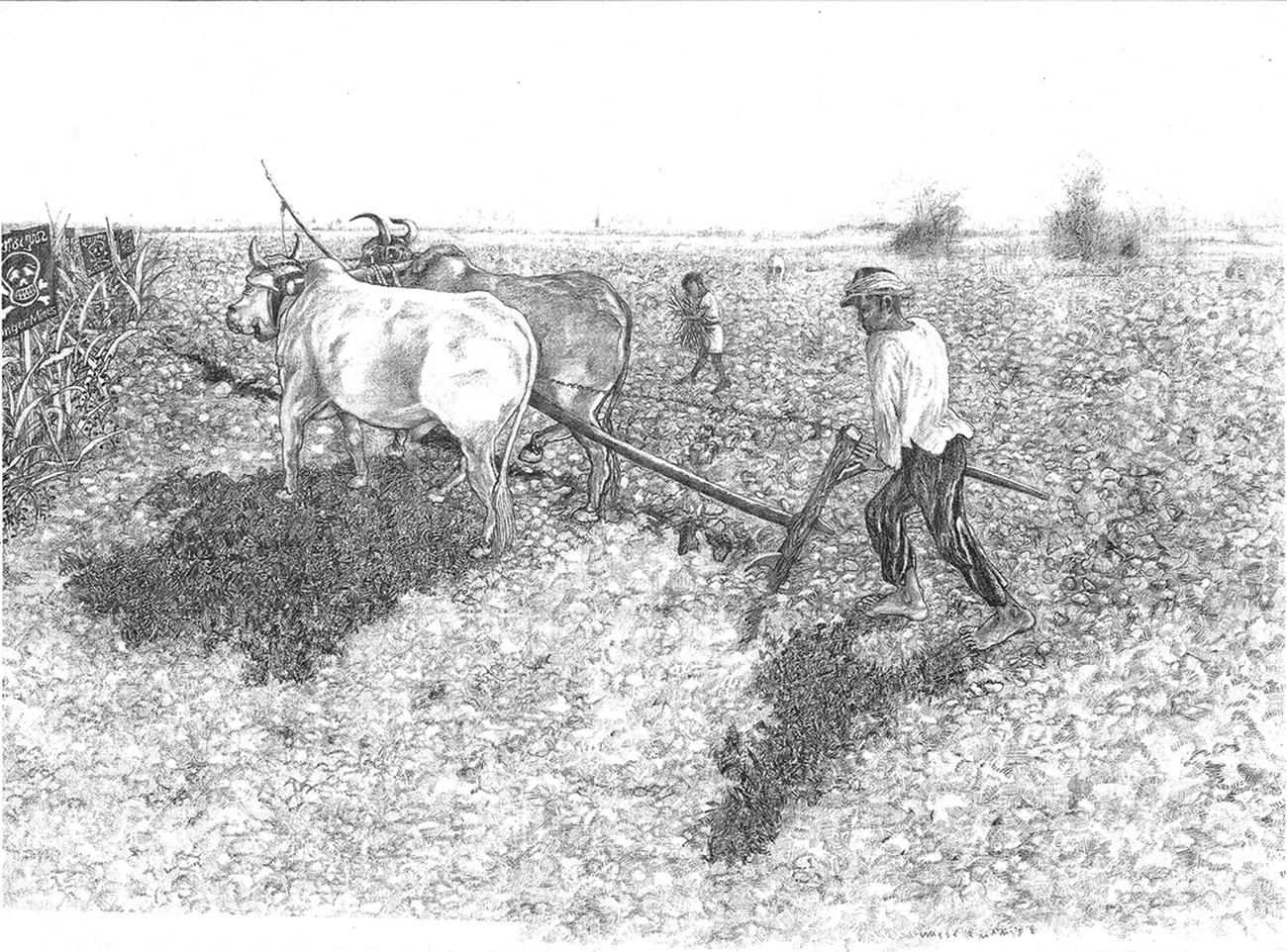 Farmer Plowing A Dry Field  is a landscape depiction of Cambodia's farming culture
as it was during the twentieth century, in the dry season. I had been asked to research and
make sketches in regard to what I found out about the use of landmines in war and other
armed conflicts. My client was the Vietnam Veterans of America Foundation---the key
organizer of the International Campaign to Ban Landmines. I composed this work as well
as other drawings and paintings for the Foundation to use in its work of generating public
awareness and advocating for the cessation of landmines throughout the world.

My work is made in graphite pencil on paper; and the framed drawing's size is approximately, 30 x 25 inches, framed

The setting is Cambodia, after the Cambodia-Vietnam War (1975, 1979-1989). People are at work cultivating the rice fields, once again. Rice has two annual growing cycles: the Spring-Summer "monsoon season" planting;
and, the "dry season" planting.

After The Landmines, Planting

I made the work of art using pencil, pen, and watercolor paint on paper. The size is 10.5 x 12.5 inches, framed 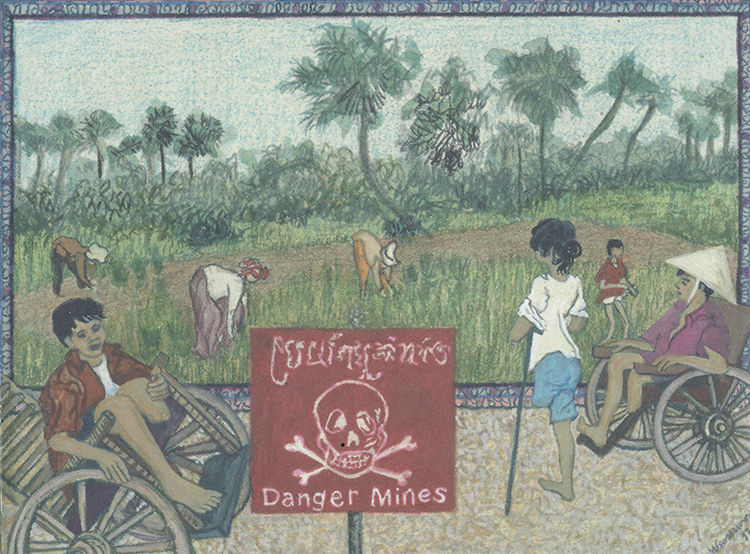 The name "krama" is a Khmer word for a traditional textile worn by men, women, and children, that is woven with either cotton or silk threads. It is large enough to be wrapped around one's body to be worn as a garment, or, as a wardrobe accessory, e.g., a belt, a sash, a turban, a scarf.

I invented the "weaving pattern" in my painting of a Cambodian krama---choosing magenta and such vivid colors to represent Cambodia's heritage and Khmer culture, rooted in the Indian subcontinent. The size of the work is 30 x 20 inches, framed 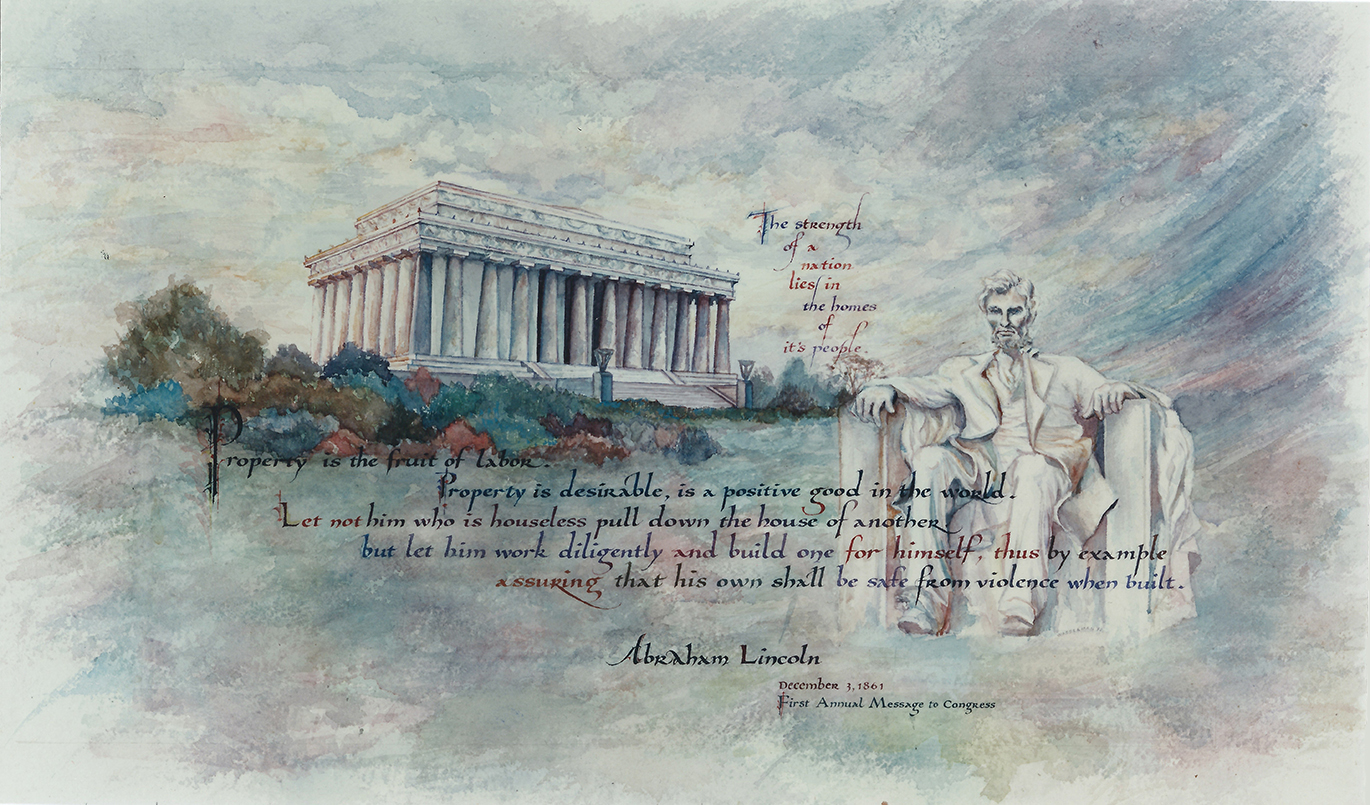 My final works of art are watercolor paintings, created on coarse Indian Village handmade watercolor paper. Each work is of the size: 31 x 18 inches, plus, the additional measurements of the picture framing.

I received the commission from the National Association of Home Builders (NAHB), to create a work of calligraphy art, using two quotations by Abraham Lincoln---and, then, a second original art of identical composition. I set up my easel on the National Mall, in
front of the Lincoln Memorial in Washington, DC, and made sketches of landscaping, the building architecture, and the marble sculpture of the seated president. The commission served the client's purpose to present one of the originals to former president George H. W. Bush, and retain the second original for display inside of NAHB headquarters. 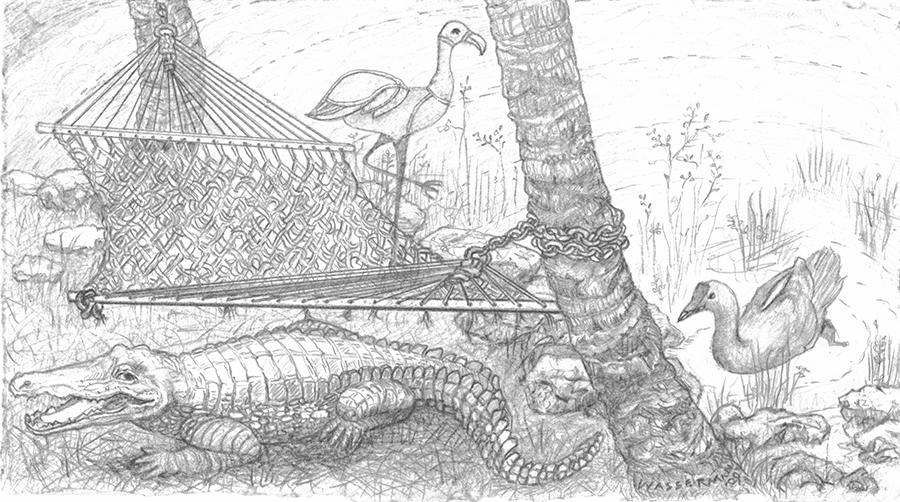 An Alligator On The Beach, Oh My!

Upon returning from a Florida, where I had spent the week sketching and photographing the gardens and private beach landscape of my client's property, I composed this fantasy of a scene with some of the local wildlife.

The pencil drawing is on watercolor paper, and measures 7.25 x 4 inches, unframed

I made a few color "test" sketches of the coconut palms as well as the "chickee hut" dock that extends into the lake from the private beach. 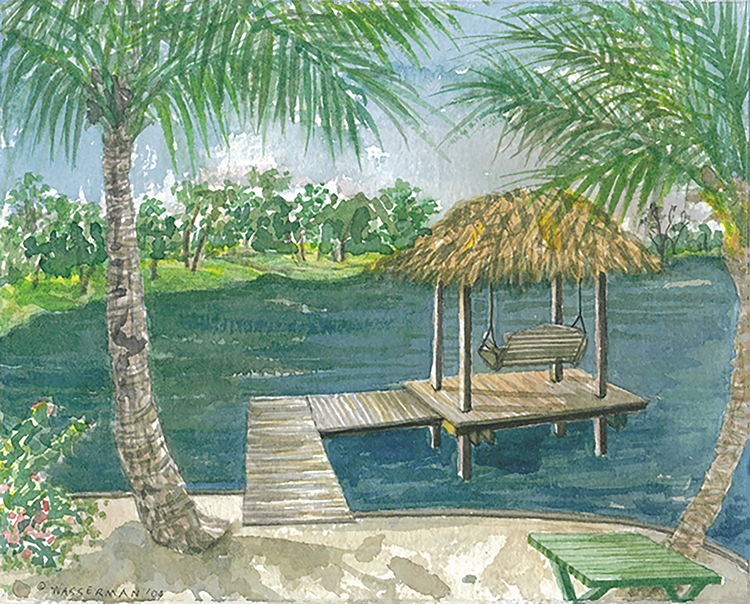 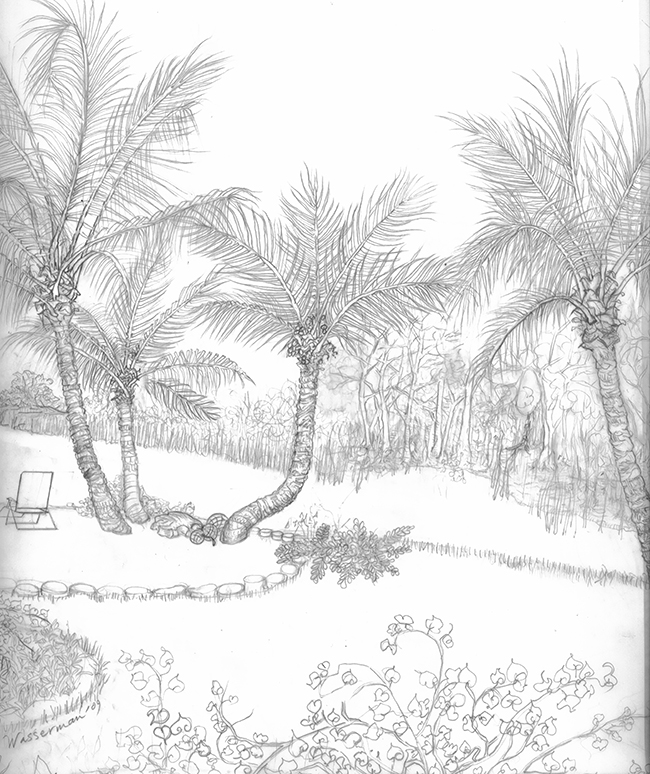 This is a drawing segment of one of my renderings of the landscape. It was made using graphite pencil.

Situated on Florida's south west coast is the home property of my client, whose "broad view" backyard is the subject of this painting. The scene is as I found it there---a cornucopia of flowering gardens, coconut palms, and other fruited plants, all growing in sunshine to the beach's edge, with some overhanging the waters.

Prior to the final work, having made sketches and taken photographs while on the property, I produced two renderings, each one from a different vantage point of the panoramic view.

My final work of art is a watercolor painting. The size of the painting is 20.5 x 24.4 inches, unframed